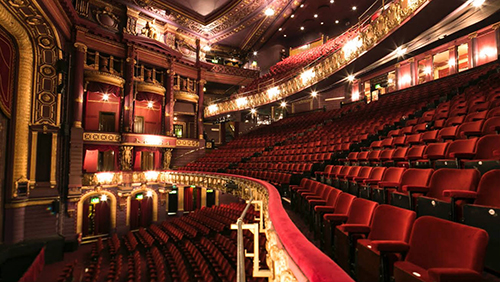 The Palace Theatre Manchester was known as The Grand Old Lady of Oxford Street when it opened in May of 1891. The building was designed by architect Alfred Darbyshire. The cost to build the theatre was an impressive £40,500. The theatre opened to a packed audience with the ballet Cleopatra being the first production to grace the stage. When it first opened its doors, the theatre boasted a seating capacity of 3,675.

Despite having such a successful opening night, the theatre struggled to make a profit for several years because of many failed initial presentations. Once the theatre began allowing popular performers, it saw immediate success.

The theatre saw great success during the early part of the 20th century with the likes of Judy Garland, Gracie Fields, Danny Kaye, Noel Coward, Laurel and Hardy and Charles Laughton gracing the stage. In 1913, the theatre’s interior was renovated under architect Bertie Crew. Harry Houdini would reopen the theatre seven months later. The renovations reduced the seating capacity to 2,600.

Today, the seating capacity is a mere 1,955 with three tiers of seating: Stalls, Circle and Grand Tier.

The Palace Theatre Manchester offers many facilities and amenities to help you make the most out of your evening.

The Ambassador Lounge includes special bespoke packages that help make your evening more memorable. These include:

Hospitality packages can be booked online directly through ATG Tickets.

The Stage Door Bar is also open for pre- and post-show drinks. Patrons can enjoy a chilled glass of wine or choose from one of the many unique cocktails which are exclusive to the bar. The bar opens at 5PM (12PM on matinee days) and stays open until late. Drink discounts are available during Happy Hour and for theatre-goers after the evening’s performance.

The Palace Theatre Manchester is also available for hire. The main auditorium features a magnificent proscenium arch stage and a seating capacity of 1,955. It’s the ideal venue for conferences, one-off hires and events.

The venue features 4 wheelchair spaces in row R of the circle. Lift access is available from the foyer level. Patrons with limited mobility should enter the theater through the rear circle. An accessible toilet is also available on the circle level.

An infra-red sound enhancement system is installed in the theatre. A headset or induction loop necklace can be provided to amplify the volume of the show. These require a £10.00 returnable deposit and can be collected from the cloakroom. Guide and hearing dogs are welcome at the theatre.

During the 1920 and 30s, the Palace Theatre Manchester featured full-length musicals, fantastic revues and extravagant pantomimes. Stars of the radio hit the stage in the 1940s, while the 50s and 60s saw productions featuring opera, rock and roll, ballet and be-bop. Famous productions, such as Guys and Dolls, Hamlet, Look Back in Anger, and The Dancing Years all made runs at the theatre. Tragically, the theatre was hit directly during the Manchester Blitz in 1940.

Much like other live venues, attendance began to decline in the 1970s, and the theatre was threatened with closure. In the 1980s, the Arts Council supported the theatre, but not before the Palace Theatre would undergo some major renovations in the late 1970s. The renovations included an extension of the stage, more dressing rooms and a restoration of the auditorium and the Front of House. In 1981, the theatre would once again open its doors with Andrew Lloyd Webber’s Jesus Christ Superstar.

Today, the theatre is known as one of the most popular and best equipped theatres outside of London. The venue attracts major touring musicals and celebrities each year with musicals, opera, ballet, comedy and concert shows being featured.

Other notable performances include:

You can find the address here, get contact details here and take a look at the seating plan here.

This website uses cookies to improve your experience while you navigate through the website. Out of these cookies, the cookies that are categorized as necessary are stored on your browser as they are essential for the working of basic functionalities of the website. We also use third-party cookies that help us analyze and understand how you use this website. These cookies will be stored in your browser only with your consent. You also have the option to opt-out of these cookies. But opting out of some of these cookies may have an effect on your browsing experience.
Necessary Always Enabled
Necessary cookies are absolutely essential for the website to function properly. This category only includes cookies that ensures basic functionalities and security features of the website. These cookies do not store any personal information.
Non-necessary
Any cookies that may not be particularly necessary for the website to function and is used specifically to collect user personal data via analytics, ads, other embedded contents are termed as non-necessary cookies.
SAVE & ACCEPT